“I don’t own a second of my life, so much so that my mom is scheduling in dinners,” Rita Ora — the blonde-haired, red-lipped British chanteuse — said, speaking from the Cannes Film Festival. “It’s been insane.”

Indeed, it’s been a whirlwind for the 23-year-old Ora, who has been globe-trotting nonstop to promote her latest single, “I Will Never Let You Down.” But in the past few weeks, whether it has been from a party or on stage, Ora has been diligent in promoting something else: her own clothing line. A close look at her Instagram — with her 2.1 million followers — shows the singer sporting an array of Adidas items, from hoodies and track jackets to shell-toe sneakers and beanies. 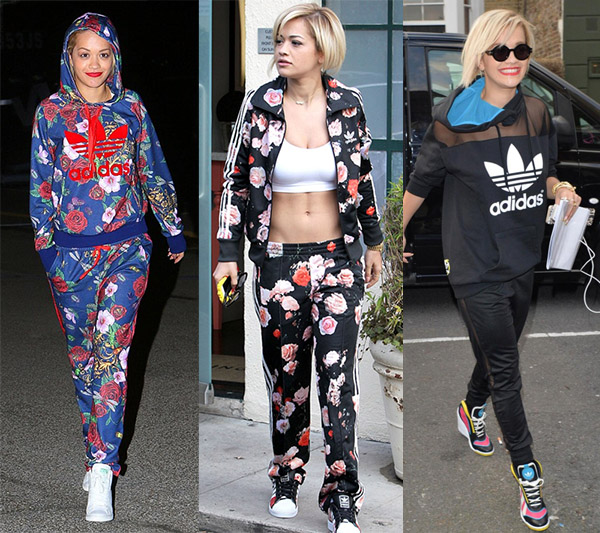 In the same vein as Pharrell Williams, who unveiled his partnership with the German activewear brand in March, and following fellow Brit designer Mary Katrantzou, Ora revealed today that she would be the first female artist collaborator for Adidas.

“I’m a massive fan of the brand,” she told WWD. “I grew up working at a sneaker store when I was 16 and am a huge sneakerhead. It’s so cool that I’m able to do this with a brand that I sold when I was younger.”

The line will come in five different capsules rolling out with three global launch days: Aug. 21 for the “Black” line; Sept. 4, for the “Pastel” and “Colorblock Packs” lines, and Nov. 1 for the “Spray” and “Roses” lines. The items will include footwear, apparel, outerwear and accessories ranging in price from $30 for a beanie to $500 for a leather varsity jacket.

The collaboration will go on for three seasons until fall 2015.

The “Black” line — based off of Ora’s London look — will be sold exclusively through selected Adidas Originals stores and on their Web site. Items will include a leather jacket with glow-in-the-dark tooling, a transparent rain jacket, a boyfriend jacket with reptile-embossed leather and wool, and a new pair of sneakers.

“Rita is, first of all, an amazing person and colorful and outgoing,” said Josefine Aberg, design director of Adidas Originals, on why the company decided to collaborate with her. “She has a great way of mixing fashion and streetwear and has a big love for the brand, and it was obvious that we needed to work with her.”

Ora said that the company approached her in September during New York Fashion Week. “I’ve been around Adidas for so long growing up and actually have one of my best friends working there,” she said. “I used to hang out in the Adidas offices in L.A. for lunch when I’d visit her and in the past two years got to know everyone there.”

Ora said that after signing on, she flew to Adidas headquarters in Herzogenaurach, Germany, and went straight to work.

“I studied all of their shoes and their archives from the past 50 years,” she said. “Before I started, I wanted to meet the team that was going to do it with me. So I did a performance at their Christmas party and met everyone. I was there for four hours going through a mood board, seeing what they have, what they don’t have and bouncing back and forth with ideas. From there on, literally we’d meet every two weeks for a five-hour meeting.”

Every aspect of the collection, she said, was based off of her sensibilities and music. Others were literal.
“There’s one look based on one of my dove tattoos,” she said. “It’s the softer, more feminine side of me with its soft colors and cutouts on the sleeves with suede — you know, things that are nice to touch and feel.”

Another look is a hoodie and matching trousers with sheer side panels.

“I wanted people to be comfortable but be sexy at the same time,” she said, laughing. “The inspiration actually for that was that I used to have these trousers with these see-through panels but they got ruined in the wash and I could never find another pair.”

Though she is now contemporaries with designers like Raf Simons, Yohji Yamamoto and Stella McCartney, among others, she said she wasn’t intimidated by the challenge of design.

“I always come from the approach that they are designers and I am an artist,” she said. “The biggest advice was that [Adidas] said is to be yourself and be confident in what you’re doing and confident what you wear. When Jeremy [Scott] did Moschino and I was like, ‘Wow, aren’t you worried that McDonald’s will sue you?’ he was like, ‘You can’t worry about that stuff — the shocking things sometimes are the best things and what people want to wear.’ You have to be brave and do what you like. I think my fashion will represent that.”