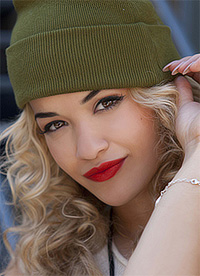 Rita Sahatçiu Ora (born 26 November 1990) is a British singer-songwriter and actress. In 2009, she appeared on the BBC’s Eurovision: Your Country Needs You where she auditioned to be the British contestant for the Eurovision Song Contest 2009. Later in 2009, she signed to Roc Nation. Ora is of Kosovar Albanian ethnicity. Ora possesses a mezzo-soprano vocal range. Her debut album, Ora was released on August 27, 2012.

Rita Ora was born in 1990 in Pristina, SFR Yugoslavia (now Kosovo) and moved to the United Kingdom in the same year. She grew up in West London and attended St Cuthbert with St Matthias CE Primary School in Earls Court, following which she graduated from Sylvia Young Theatre School and then St Charles Catholic Sixth Form College. She began singing from a young age. In 2004, she appeared in the British film Spivs. She auditioned for Eurovision: Your Country Needs You on BBC One to be the British contestant for the 2009 Eurovision Song Contest but later withdrew from the competition after a few episodes as she did not feel ready.

In 2007, Ora had her first music release when she appeared on Craig David’s track entitled “Awkward” and then again in 2008 on “Where’s Your Love” featuring Tinchy Stryder, for which she also appears in the music video. Ora began singing in bars in and around London, and in 2009 a A&R told Roc Nation about Ora, a few days after Ora flew out to New York and met Jay-Z. In 2009, Ora made a cameo on Jay-Z’s video for “Young Forever” and “Over” by Drake. Ora caught the attention of Jay-Z and he signed her to Roc Nation, for which she was featured in a commercial for Roc Nation + Skullcandy Aviator Headphones.

Throughout 2011, Ora released viral videos of herself working on her debut album. On 14 December 2011, DJ Fresh and Ora released the music video for “Hot Right Now” on YouTube. The single was released on 12 February 2012 and reached No. 1 on the UK Singles Chart.
On 24 February 2012, Ora visited New York’s Z100 radio station alongside her Roc Nation label boss Jay-Z, to premiere “How We Do (Party)”, her debut single and the lead single from her upcoming studio album. “How We Do (Party)” borrows its familiar refrain from The Notorious B.I.G.’s “Party and Bullshit”.
She took two years to completely finish her first studio album. will.i.am, Ester Dean, Drake, The-Dream, Kanye West and Stargate all worked with Ora on her debut album.

When speaking about the sound of the album and its concept, Ora said it “definitely has pop in it, but (…) you can hear influences of jazz in there, you can hear influences of Monica and Aaliyah, and then you can hear Gwen Stefani.” She has also stated the album will be influenced by her father’s record colllection which, in addition to reggae, also includes such artists as Eric Clapton and B.B. King.
Her first solo record, “R.I.P.” featuring Tinie Tempah, was released as her first UK single on 6 May 2012. The video directed by Emil Nava was recorded in Hackney, East London, and released on 4 April 2012. Produced by Chase & Status, the song debuted at the top of the UK Singles Chart, becoming her first solo UK number 1, and second overall. In May, Ora became a guest judge on the ninth series of The X Factor in the UK, with the auditions filmed at the O2 Arena, London. Whilst touring with Coldplay, she later announced that the album would be named Ora, which was released on August 27th 2012.